Context
The village of Almetyevo has always been far away from serious historical storms; therefore many fled here, hiding from difficult circumstances. This how the mixed composition of its residents came to be. At the beginning of work on the project "Tales of Golden Apples", Alsu Nurgayazova from Kazan sent the story "Meal," with illustrations by the Greek neo-muralist, to the writing competition.
"It's impossible to break our friendship forever, / We are strung on a single thread" - as Tukay wrote. It is amazing how a young man could feel and so accurately and simply speak about the centuries-old history of our Russian-Tatar family. As in any family, there was everything: quarrels, mutual discontent, and moments of unity. So it is in our village, Shuran. There is a Russian street, and there is a Tatar one. And so it has been since ancient times.

Even during feudal times, this unity was not broken. So, do you think why, even though Valera was mischievious, we never refused him anything? After all, if not for their Timofeev family, it is still unknown who we would be now. Our families are connected by centuries-old friendship. Everyone knows that Kazan fell in 1552. While not immediately, over time, they began to forcibly convert Tatars to the Orthodox faith. This eventually reached our village of Shuran. People in the village were resentful, because since ancient times, in the Kazan Khanate, according to the precepts of our Bulgarian ancestors, all peoples lived in peace and harmony, regardless of faith. And now, having learned that the commission with the priests was already close, the inhabitants decided to play a trick. I don't know who first thought of this trick.

The Tatars have a proverb "Khaylәsez dnya faydasyz" ("A world without cunning is not interesting"). Yes, and the Russians having a saying about the Tatars: "The woman from Astrakhan is more cunning than even the cunning, wise woman of Kazan." When the commission for new baptisms entered the village, they didn't find anyone on our street in Tatar houses. I don't know how the Russians explained their absence: maybe the Tatars hid in the forest, because the forest was close, or maybe, for greater conviction, they branded the Tatars cowards and "dark people." No matter what they invented, the priests left the village without baptizing anyon. Not right away, but a few days later, Tatar families began to leave and return home from the cellars, cribs and closets of Russian houses. To this day, both Orthodox Russians and Muslim Tatars live in Shuran. The Timofeev family hid our family. This is how the friendship between the Russian and Tatar families of the village was held together forever. Never forget that." 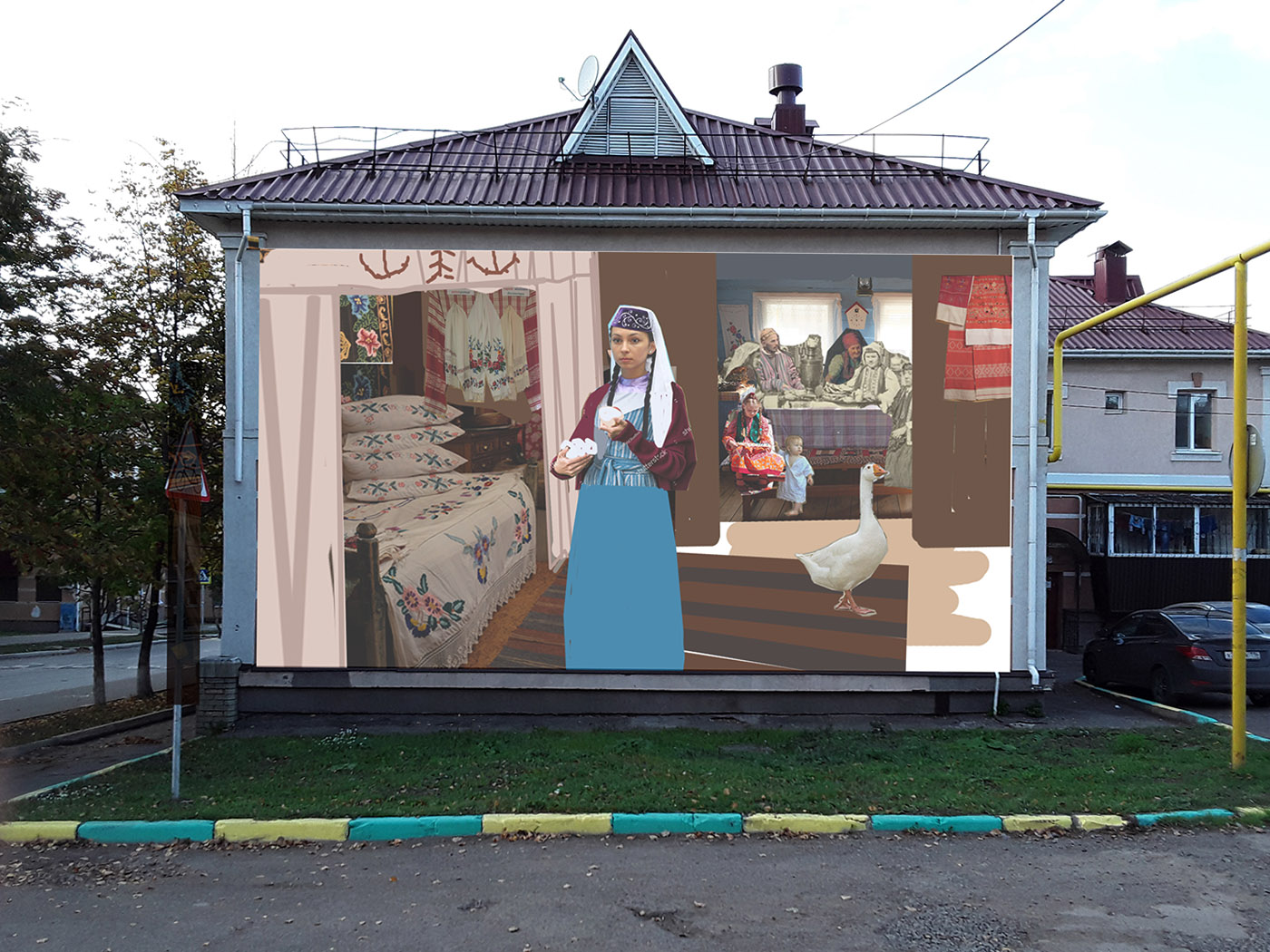 Monumental wall painting created on the façade or blank wall of a building or other urban architectural object.
This modest work has its basis in anthropology. At the very beginning of our research, we held a small competition among young writers: the authors sent us stories told by their loved ones. One of the stories, told by a grandmother, Alsu Nurgayazova, from Kazan, was about how a Russian family hid Tatar neighbors from forced baptism. This tragicomic mise-en-scenes illustrates the tradition of good-neighborliness and is characteristic of Tatarstan, a melting pot more than 1000 years old.

Later, during research by anthropologists, the director of the Tatar State Drama Theater in Almetyevsk, Farida Bagisovna Ismagilova, spoke about her childhood: how a goose lived under her bed with her goslings. These images were repeated in the stories of many people. We combined two vivid stories, which may sound fantastic to the resident of a modern metropolis, and imposed on the pattern of the interior of the Tatar home, with which Guzel Fuadovna Valeeva-Suleymanova, a specialist in the history of Tatar fine art, helped us.

Dimitris Taxis embodied all this: as a representative of new realism, where behind female images, there is cinematic drama. This is a fragment of a bygone reality left in the stories of people and their sensations of color. 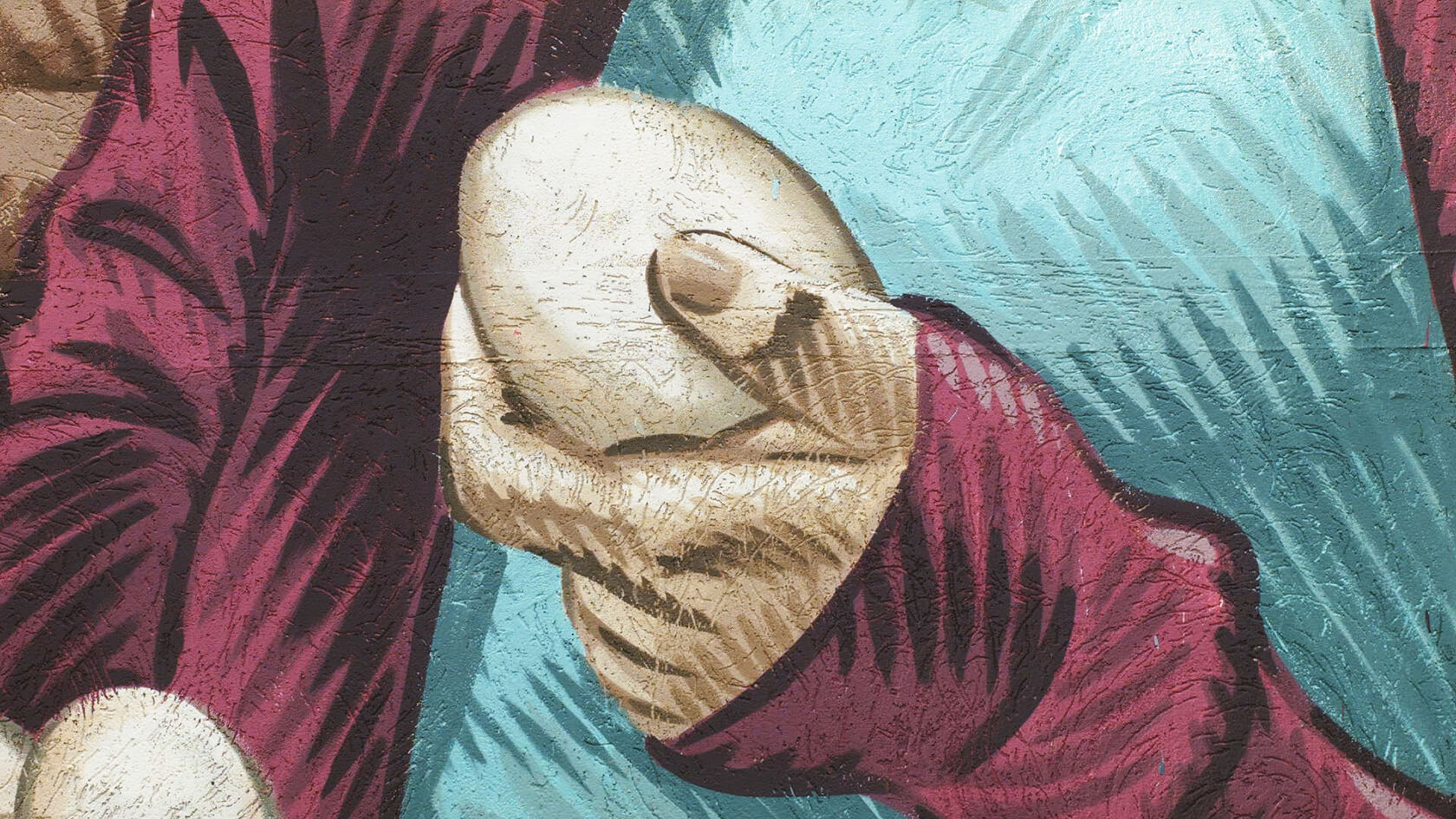 Fragment of the mural "Dinner"
Polina Yozh
Project lead, curator, founder of the Institute for Research on Street Art
Artist
Dimitris Taxis was born in the Polish city of Szczecin, but grew up and received a formal art education in Athens. There he became involved in the graffiti movement, first experimenting with poster techniques. His vivid characters appeared in different parts of the ancient city, chasing passers-by with a mirror image. He also draws comics and book illustrations. 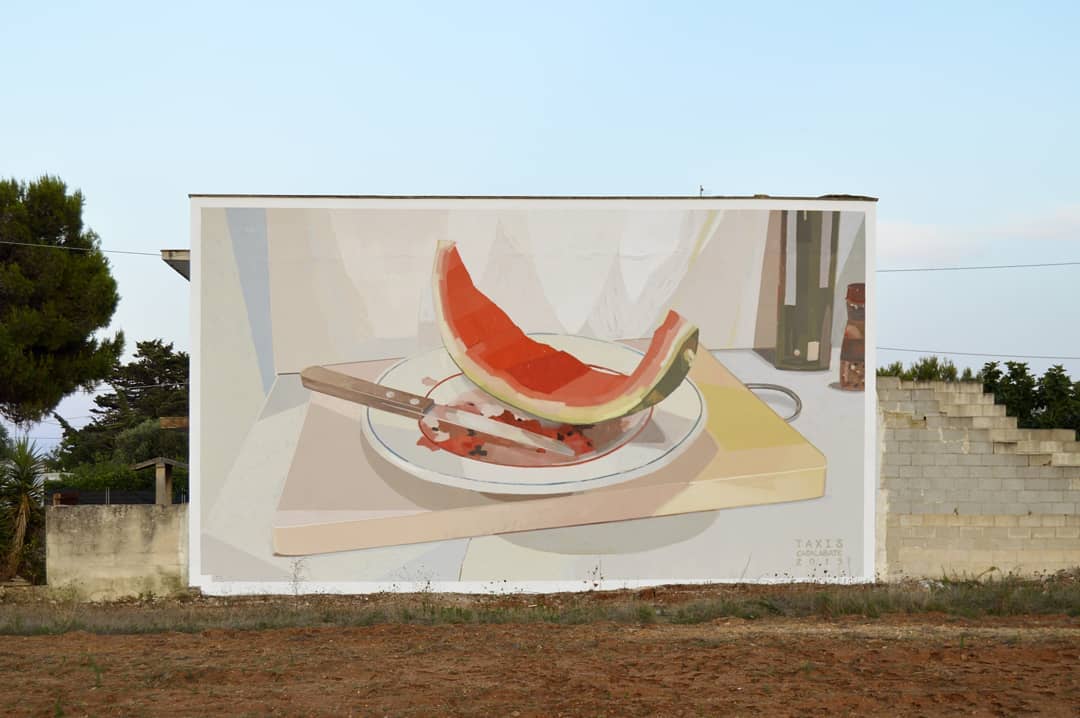