RU
TAT
About the project
Tales of Golden Apples is a long-term development project enhancing public spaces and local communities in the city of Almetyevsk (Republic of Tatarstan).

We bring together the study of historical memory and the cultural code of Almetyevsk, the creation of public art, the transformation of the urban environment, and an educational program for those who live in the city and those who come as guests.
The language of contemporary art makes it possible to talk about local culture in its unbroken entirety: about tradition and modernity, about the past, present and future. When such art leaves museums for the streets, everyone can feel involved. And what is important is that public art is the art of the young, which means that culture is not something that was created earlier and by someone else. This is what is created here and now by all. So the story ceases to be archival and enters into the life of the city today and tomorrow.

This is seen even in the name "Tales of Golden Apples," which refers to an old Tatar fairy tale, the hero of which discovers that the main wealth of a person is his children. Our goal is to show that such key Tatar values as family and roots remain relevant today.

And it is no coincidence that the symbol of the project — an apple (in Tatar — "Alma," the sound of which is contained in the city's name "Almetyevsk") — is depicted in black and gold. Thus, on a symbolic level the thousand-year-old Tatar culture converges with the image of a young city, the life of which is connected with the region's main natural wealth — oil.

We want to transform Almetyevsk not only outwardly but by involving residents in the project as well — those who make up the local communities and who are not indifferent to the life of the city. A series of educational events is aimed at this: gatherings and master classes with artists, expert lectures on art in its various forms, and bicycle tours that help to see one's city in a new way.

At the heart of "Tales" is a large cultural study, which was conducted by anthropologists, historians and folklorists in the Almetyevsk region. It is dedicated to the traditions, values and aesthetics of the Tatar people.

In the course of the study, a team of anthropologists, folklorists and sociologists spoke with residents of Almetyevsk and nearby localities in order to understand how the residents themselves perceive their city, how their past and present are seen, and what constitutes their identity. Historians have identified the cultural and historical context in which the project is inscribed. Curators, working with artists from different countries, came up with an approach that allowed culture, history and their connection with modernity to be described in the language of public art. Within this concept, new images were invented and embodied. Thus, as a result of this collaboration, scenes and images from ancient fairy tales, primers, and letters from coins were transformed and moved from museum exhibitions and rare books to the walls of houses and to public spaces. Now they are part of the everyday life of all on the city streets, where the thousand-year history of the region comes to life and is imbibed with new meanings. 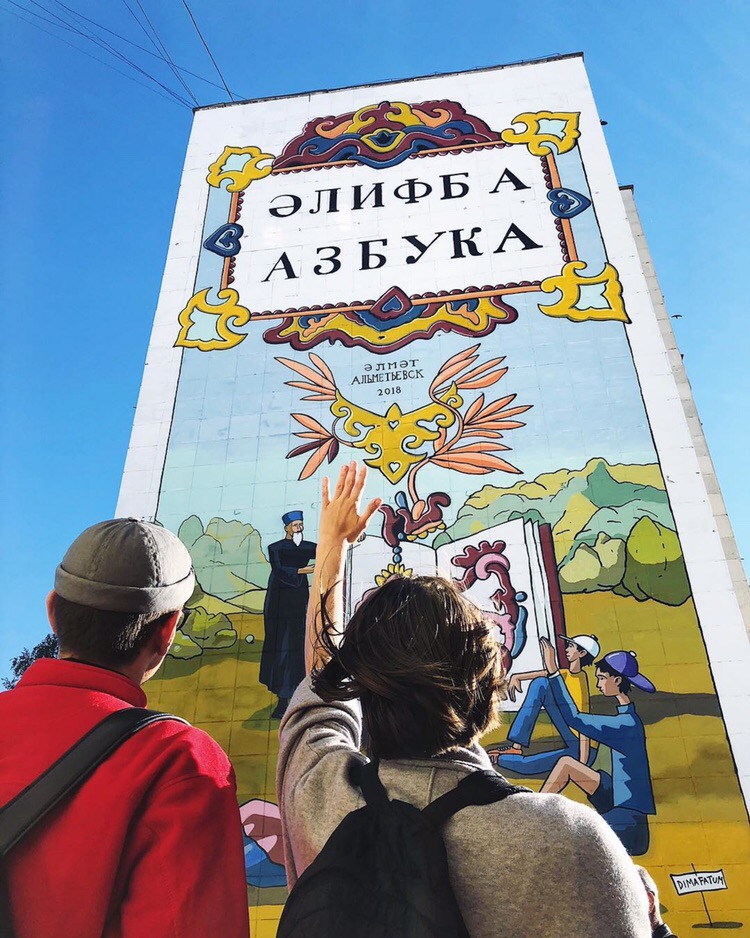 One night a rich couple go to bed and hear noises, children's shouts, and laughter from the neighbor's house. And the rich man thinks: "How much fun they have and we do not, although we are rich and can afford whatever we want, and they are poor." In the afternoon, he asks the poor neighbor why they live so happily and cheerfully. The poor man replies that they play with seven golden apples every night. The rich man decides to buy golden apples, not just seven but twenty-one right away. He begins to toss them around with his wife. It is fun, but not for long. The next time he asks the poor man why it is so much fun for them to play apples. The poor man replies, "Come into our house and you'll see." Going into their house, the rich man sees seven children playing, all in different ways. One tumbles, one runs, one laughs, etc. The poor man says, "seven apples, that's our children."
The project is an initiative of Tatneft and is carried out by the Institute for Research on Street Art with the participation of a group of invited experts and artists from various countries.

The project would not have been possible without the following people:
Nail Maganov
Almetyevsk
General Director of Tatneft, project founder and visionary.

"We are working on all of these changes in Almetyevsk for one simple reason — this is our city. We live here, we work together here, all as residents of the same city. In our strategy and in our thoughts - to make our city better every day and every hour, and not just before holidays."

Participates in the development of the project at all its stages, in particular, overseeing its implementation in the city of Almetyevsk