Context
The creation of the diptych "The Moon and the Sun" by Almetyevsk street artist Damir Bozik was inspired by the Tatar fairy tale and eponymous poem by Gabdulla Tukay.
There is a golden cradle in the Himalayan heights,
The one who sleeps in it is guarded through the night.
When the Sun is rising, the Wind is already there
Praising the Sun's entrance, the world must be aware.
The Wind serves as a herald whose duty is to say:
"The Sun's already up, greet another day!"
And when the Sun is out, performing his daily race,
Crescent, his young brother, takes the cradle's space.
Never left alone, he's surrounded by the stars,
Like the tiniest of torches, they shine from afar.
Crescent in the cradle sleeps for the entire night,
Till the Sun awakens Him with early morning light.
Day comes after night, brother comes after brother,
While one of them rests, he can count on the other.

Gabdulla Tukay, "Crescent and Sun," translated by A. Korolev 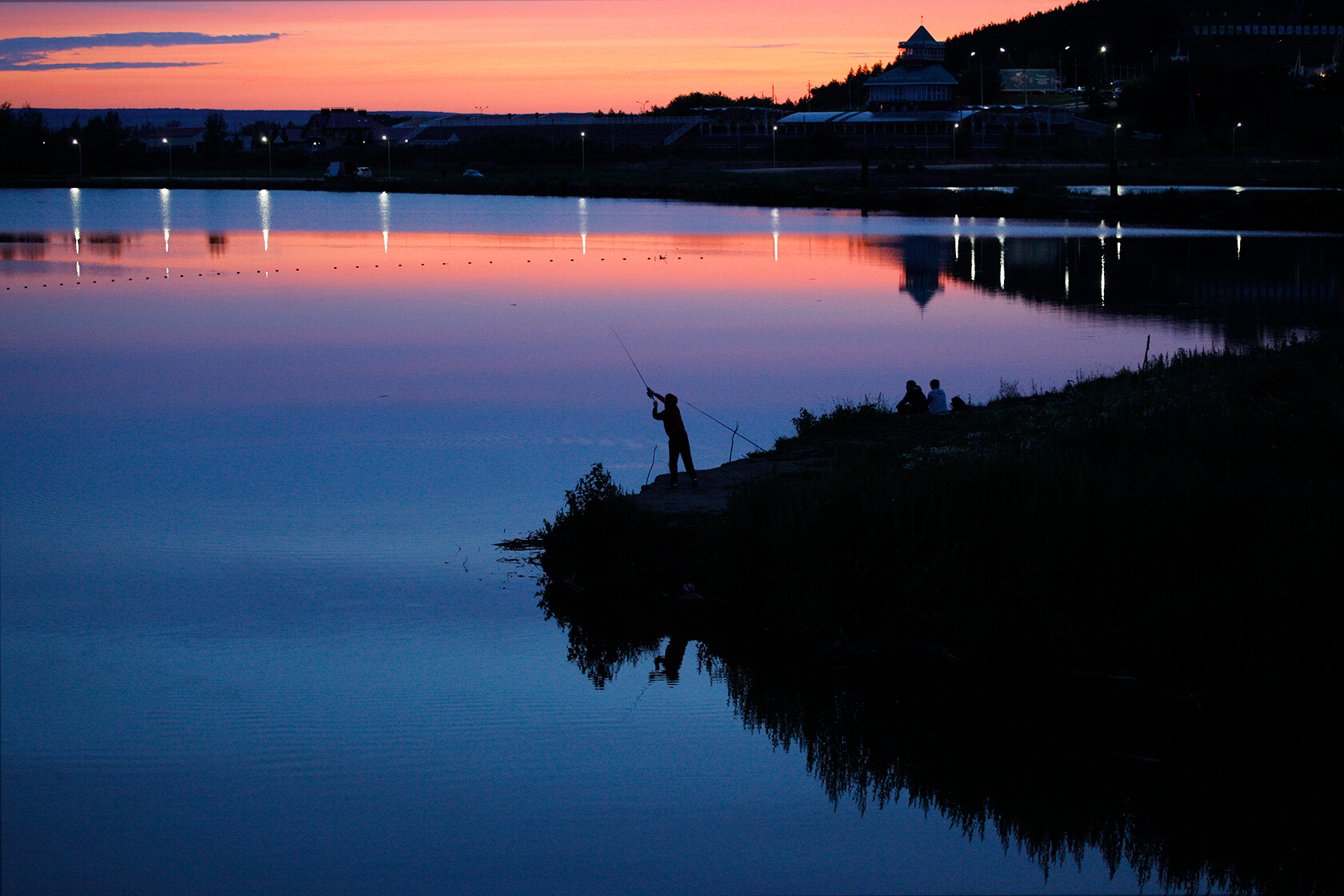 Almetyevsk city. 2019
Process
Art form: mural (diptych)
Method: pointillism
Material: acrylic spray paint
Pointillism or divisionism, is a stylistic trend in neo-impressionistic painting that arose in France around 1885. It is based on a manner of painting in separate strokes of an exact point or rectangular shape. It is characterized by the rejection of the physical mixing of colors for the sake of optical effect (meaning "mixing" in the retina of the viewer's eye)
This lyrical work in two parts is made in bright colors inherent in the artist and conveys the human experience during a meeting with sources of light. In "Sun," children meet the sunset on the river bank. In "Moon," a couple fishes on a river on a moonlit night. These two completely different states are conveyed in contrasting colors: a warm yellow-red evening and a cold, blue night. The style of drawing with dots in the tradition of classical pointillism (from the French. Pointiller — "write with dots") gives the work depth and vibration. 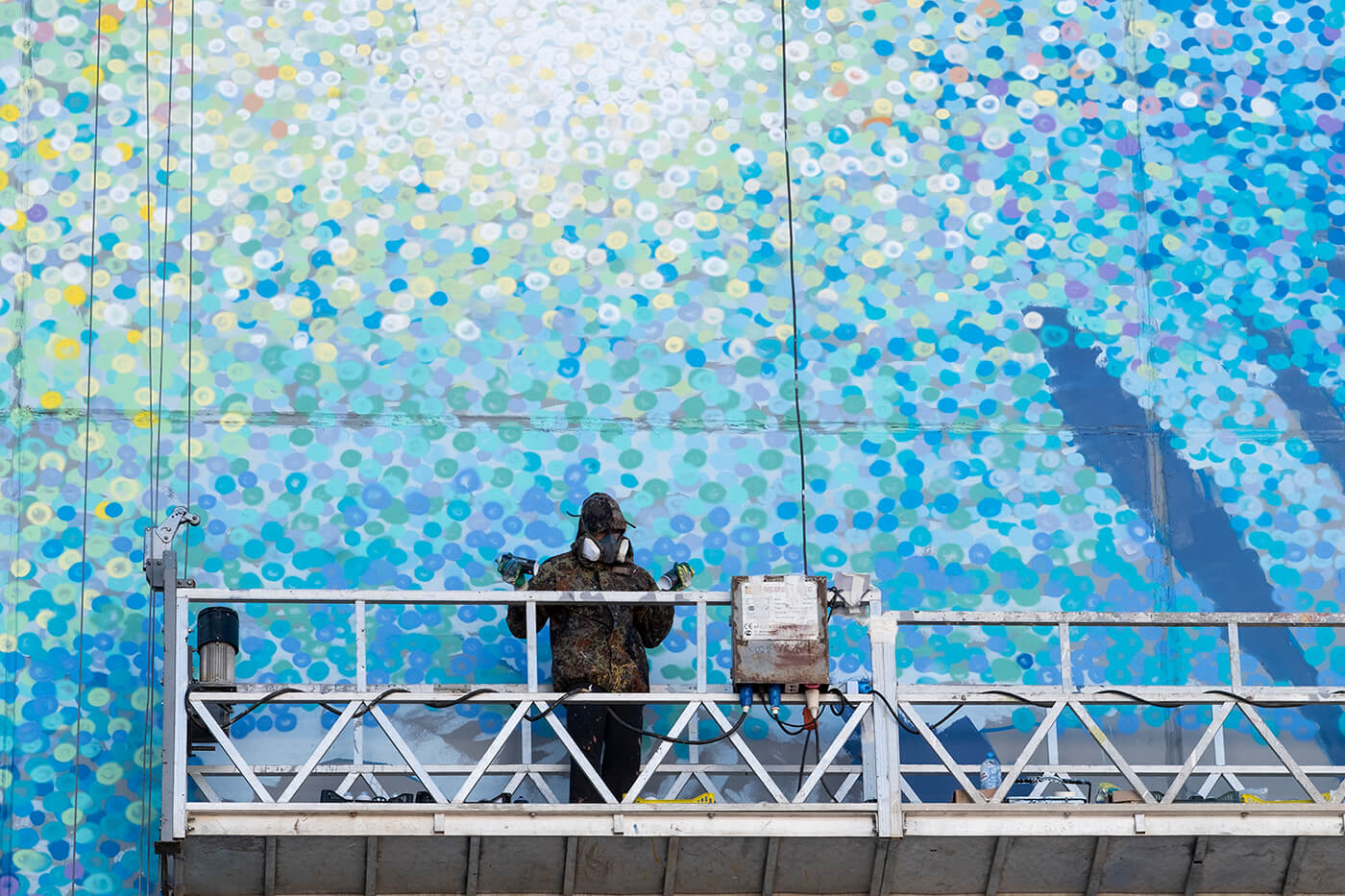 Working on the mural. 2018
Polina Yozh
Project lead, curator, founder of the Institute for Research on Street Art
Artist
Damir Bozik (Almetyevsk)
Artist
"I really like to paint with points. This is how I see the world, consisting of many points, particles of light, dancing, uniting into something integral. In general, I draw to convey my sense of boundless joy, to share my emotions with other people." 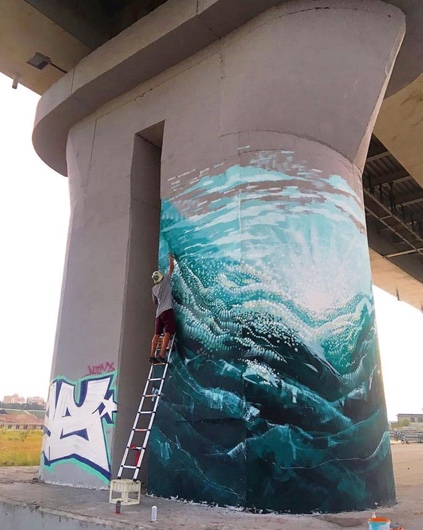 Painting "Millennium" Bridge. Kazan. 2018
Among artists from around the world involved in "Tales of Golden Apples," Damir Bozik represents Almetyevsk. A student of graffiti, Bozik has long used a modernized method of drawing with dots: to visualize the tales of nature, harmony and the interaction of the elements, he turned to the pioneers of pointillism and created a work that refers to the traditions of impressionism.
bozik.ru
Address
Diptych "Moon and Sun"
All objects
Subscribe to our mailing list and get the latest news about the project
goldenapples@streetartinstitute.com
CONTACTS